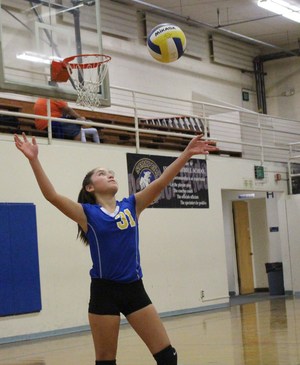 Our Cougars are on a roll! Click to read the coach recaps of the games!

The 7th grade "B" team defeated Nampa West in 2 straight matches, 25-3 and 25-13. The Lady Cougs continue to impress with excellent teamwork and their perseverance on the court. Lexi Silvia and Jacey Rodriguez led the team with strong serves and excellent passes. And a special congratulations to Faith in her first game with the "B" team. She made several great plays which include 2 digs.

Jefferson Cougars!! If you did not attend the 8th grade volleyball game at Syringa yesterday you missed some fabulous volleyball. The Cougars took the court with fight in their eyes and determination in their steps. The Lady Cougars went up against the Vallivue Falcons. In the first game there were some amazing rallies going on and the girls were moving the court. Adriana and Alejandra  Mayorga were all over the court taking the cougars to the win of 25-15.

In the second game there was a buzz in the gym as the Cougars played to win.  Cadance Patterson was on the court and helped the team to the 25-18 victory. The Lady Cougars are currently undefeated and with two games left next week we hope to finish the season that way.

The 8th grade B team continued their winning ways yesterday defeating West in two games 25-20 and 25-15. It started in the first game with Shyanne Good serving for eight straight points!  Every team needs someone to step up and be a champ and ours was Jayla Martin yesterday when she served for 10 points to get a big lead. Great serving along with Julia Rodriguez being a force at the net lead to an easy win in game two.  Great job, ladies!!

The 7th grade A team secured another win last night beating Nampa West 25-13 and 25-15. Top scorers were Victoria with 12 points and Saray with 9 points. The Cougars had their best hitting game of the season with Maria and Nevaeh both earning points for the team with their attacks at the net.