A Team Boys Season Comes to a Close 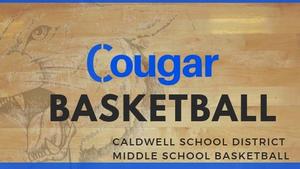 Caldwell's A team players finished their 8th grade careers after a hard fought game vs. Vallivue last night. (Read more)
If their electrifying performances over the course of the season were a glimpse of what is to come from this group, Caldwell has a lot to look forward to in the seasons ahead.
The 8th grade Boys Basketball "A" team lost in the first round of the District Tournament last night 49-29 to Vallivue. The Cougars only trailed 24-18 in the final seconds of the first half, but a late 3 pushed the lead to 7 and the Falcons pulled away in the second half. Anthony Berber had a nice game for the Cougs with 15 points and 6 rebounds. "We played very hard for all 28 minutes, representing ourselves, our schools and our community very well, I was proud to be your coach," commented Coach Harrison. The Cougars finished at 8 and 5 for the season!
Published March 10, 2020